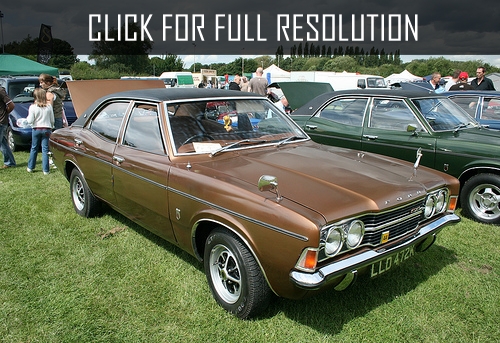 Ford Cortina was a quite popular in the 1970-1980's The Western European model of the segment D. Production of family two- and four-door sedan and five-door station wagon (Kombi) Ford Taunus / Cortina began in 1970 (in Germany model called Taunus, on behalf of the prominent hill near Cologne - the location of the central office and the largest factory of the European branch of Ford, existed from 1963). Ford Cortina was produced in practically all of the then European factories Ford, and the name Cortina was given to the English version of the "right-hand drive."

Sedans of classic-style décor enjoyed good demand those times, but by the mid-1970s have been significant changes in the tastes of the public, and in January 1976 has gone into production considerably reworked design model Ford Cortina second generation. The exterior design has become even easier and more severe, narrow bumpers got rubber pads and plastic fangs, the radiator grille with its sleek negative slope is made of plastic. Style defined large rectangular block lights.

Running gear with the independent lever lobby and a rigid beam and the top inclined planes and the lower longitudinal levers of the back bridge suspended on springs and with stabilizers of cross stability provided quite acceptable characteristics of controllability (in comparison with rear-wheel FIATS). The program of carburetor engines first passed from the predecessor. Ford Cortina was available with engines "V4": 1.3 liter, 59 hp; 1.6 liter, 68, 72 and 88 hp (double carburettor); 2.0 liter, 98 hp. The most powerful was 2.3-liter V6 Type C with lower position of the camshaft and hydropushers valves, which developed up to 108 hp. In August 1979, the engines of 1.3 and 1.6 liters upgraded by equipping the cylinder head to the overhead camshafts (ONS).