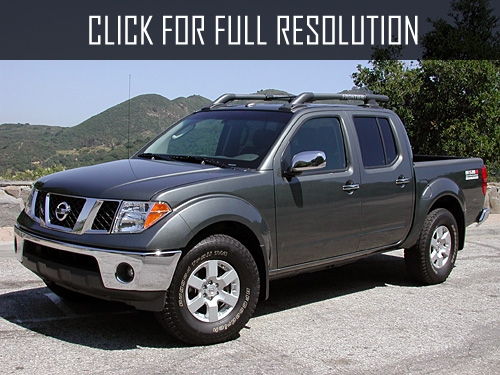 This model is considered the first generation of pickups which debuted in 1997. Release of model was very successful and enjoyed a wide popularity therefore it was exported to Asia, America and Europe. Also, Nissan Frontier is known under the names Nissan Fiera, Nissan Pickup, Nissan Hardbody. In general, the car can be characterized as very comfortable, safe and enduring. The body has been made on the basis of a frame design. Also there are two options of a cabin - two-door and four-door extended. In this model used several variations of engines -  2.4 liter gasoline and two diesel engines with 2.5 and 3.0 liters. All wheel drive system of the car provides excellent driving characteristics, regardless of the type of road. In 2004, the release of this car has stopped, because the new model has been developed.

Modifications for each market take account its specificity. For example, for Japan - models with five versions of four-cylinder petrol and diesel engines in working volume from 1998 to 3153 cm3 capacity from 91 hp to 126 hp, and for export - four versions 91-103 hp. In Europe, available for sale only diesel cars, while, in the US, vice versa, available only petrol modification. And from last year the company offers for North America a family of models only with one 145 hp engine so far, and more comfortable complete set with the 3.3-liter V6 motor (152 hp) is expected this year. Basic equipment of the American Nissan Frontier on a normal chassis with rear-wheel drive - the most popular - is about 80% of total sales of pickups.