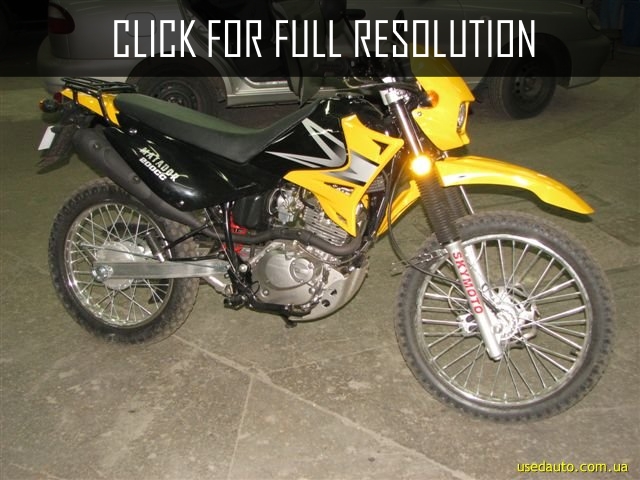 A brief history of QINGQI

1956 - the firm produced China's first motorcycle, which marked the beginning of QINGQI.
1985 - The firm purchased the technology of K-series motorcycles and equipment from SUZUKI, that promoted the level and quality of production motorcycles QINGQI twenty years.
The company manufactured the very first scooter in China that it has made the company QINGQI one of the earliest and biggest manufacturers of enterprises on production of scooters in China.
1992 - Products Series GS125, AG50 / AG100 been fully implemented into production. Production technology SUZUKI GS125 was fully prepared and put into production.
1993 - The year of foundation of China QINGQI Group, in the same year, the company's shares went to market.
1994 - in QINGQI fully implemented technology of Suzuki GSX250.
1997 - produced about 1.68 million units of motor vehicles, and the company has received the status of number one exporter in China.
1998 - A new factory was founded Jinan Qingqi Motorcycles Co. Ltd., which on output included in the list of leading companies in the world, producing motorcycles.
1999 - QINGQI received the title of "most famous brand in China."
2000 - founded Indonesia YPT VIVAMAS Qingqi Motorcycle Co., Ltd.
2002 - Production QINGQI received confirmation of an international certificate of quality ISO9001.
QINGQI again been named as "the most famous brand in China."
2003 - QINGQI receives "A patent for a new series of products," it puts products QINGQI on one level with the products well-known manufacturers.
2004 - brand QINGQI 40 years !!!
Big upgrade Jinan Qingqi Motorcycles Co. Ltd., the production of new models of motorcycles, scooters, ATVs.
2005 - the beginning of cooperation with PEUGEOT, a French manufacturer of scooters and motorcycles.
Development of new models of scooters and motor together with PEUGEOT. Manufacture of components for the company MERCURY, the famous manufacturer of outboard motors.
2006 - Production of the moped VOGUE 50 PEUGEOT. PEUGEOT company began selling in Europe, several models of scooters QINGQI under its own brand. Model QM200GY (Enduro) production QINGQI recognized as the best in its class among similar models produced in China. Based on the model, a new model QM200GY class Supermoto, not inferior in quality and technical characteristics of analogues of known world manufacturers.
The increase in the supply of motorcycles QINGQI in Europe.
2007 - release of brand new models of scooters, motorcycles and ATVs, as well as the development and production of new engines. Construction of a new plant to meet the growing demand for quality motorcycles. PEUGEOT QINGQI and set up a joint company that will develop new models Suter, motorcycles, as well as engines. For the design of new models attracted Italian design studios.
2008 - Worked from a new plant for the production of scooters QINGQI PEUGEOT - a co-production with QINGQI. Beginning in 2008, PEUGEOT plans to move production of motor scooters volumes of up to 50 cm. Cube. a joint plant with QINGQI.
PEUGEOT company expanded its range of motorcycles QINGQI, which is sold in Europe under the brand PEUGEOT
Since January 2008 started production of the first model scooter PEUGEOT VIVA CITY.
Founded Pakistan Saigols SOM Qingqi Motorcycle Co., Ltd.
For the first time the company has produced about 1 million units of motorcycles per year, the company QINGQI became the market leader in China.
1995 - Production of the first in China international quality certificate of ISO9001, approved by the German TUV and American DOT.